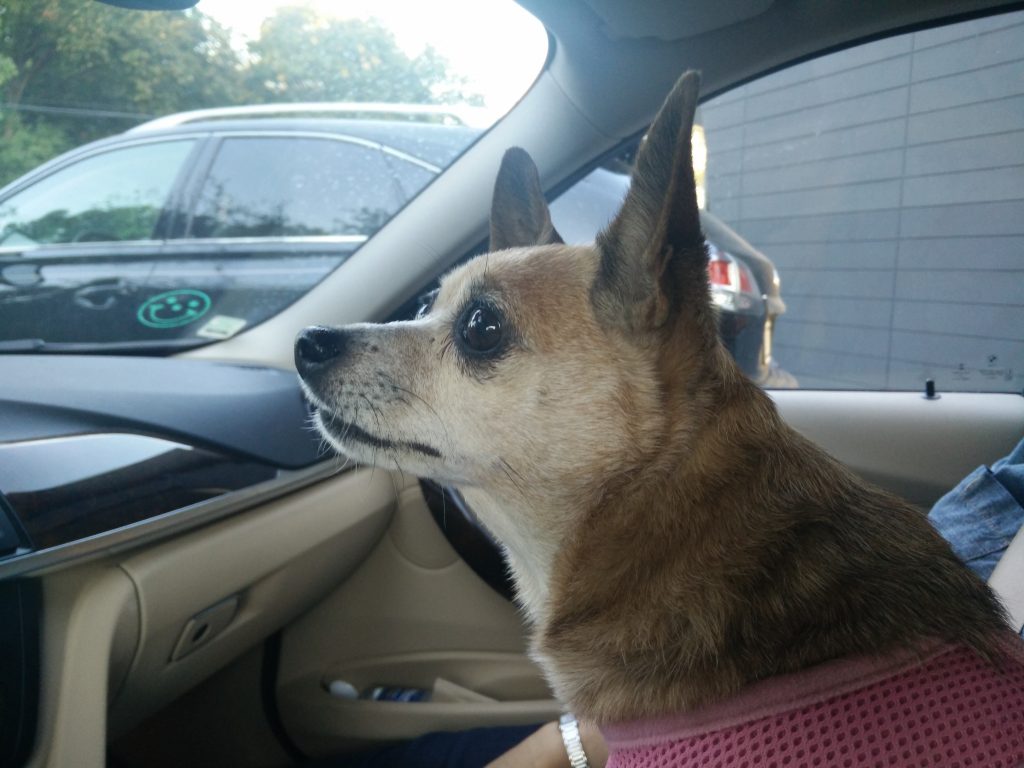 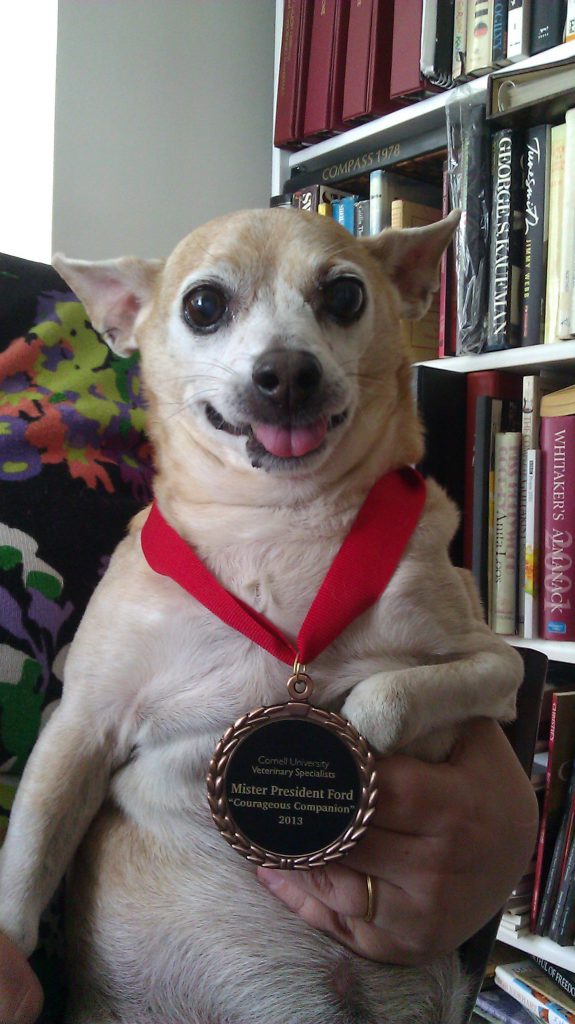 I was prepared to go into extended mourning, draping crepe over the balcony, while Becky to ease her grief went almost immediately to adoption web sites over my whispers of “are you sure we’re quite ready?” In exchange for an admission that, in fact, we might be, herself gave away the final decision to myself, presumably assuming that I would, at the end of the day, defer. A fortunate misapprehension, as it transpired.

The subtle approach being what it is, we found ourselves in contact with a truly extraordinary shelter called For The Love Of Dogs in Ossining, NY, the sort of place that doesn’t let you know exactly where it is until after they’ve decided you’re good enough for their dogs. The bar seemed high: the shelter itself is in a lovely house given over expressly for the purpose on a large horse farm. With some trepidation we made our way there some time in the middle of September of 2014, pushed the buzzer on the gate, and were allowed in to this Shangri-La in Westchester.

A little chat with some of the people, and here came the small dogs to greet us eagerly in “take me home, please!” mode. I most remember Heathcliff, a tiny chihuahua with a personality that even a large horse farm could barely corral, and Lucky, a white French Bulldog mix that Becky particularly adored, and whose sobriquet had been a cruel misnomer, his relatively young owner having been lost in a car crash not long before. One small, historically underfed, timid little golden girl hung back while all the others strutted their stuff. She’d play with the other dogs for a moment in the house, but then decide she’d really rather be off to one side. Perhaps I sensed a kindred spirit; who knows.

On our second visit to Love Dogs a week later, I sought that one out, as one would have to do to spend time with her, picked her up, she snuggled in and I swear I felt some of the fear melt away (hers I hasten to add). 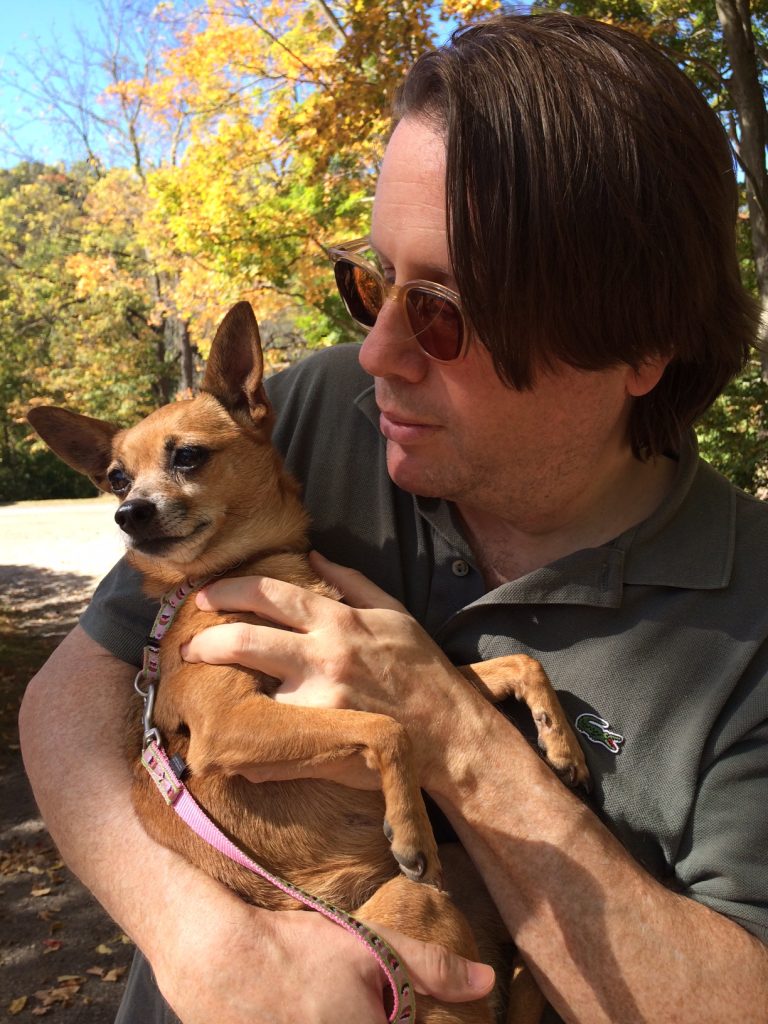 Becky continued to play with the more outgoing dogs, and as we took our leave and drove home, discussed which one we wanted to add to our cozy ménage. “Heathcliff’s too bouncy, but what about that adorable Lucky?” I was asked.

The not wholly unexpected response came back, “Who?”

“The small golden chihuahua/mini-pinscher mix that I spent the whole hour with?”

“I don’t think I even saw her. So how about that Lucky?”

“But Lucky was so sweet, and I Felt so sad for him.”

We agreed to come back one more time before making a final decision, so Becky could spend some time with the dog she hadn’t even noticed. And she was a timid one. Ten months in shelters, five in North Carolina where she ended up on death row, and five more in the ultimate secure location of Love Dogs, where we were told that not only had she never come close to being adopted, but that there had not been a single expression of interest, despite her being the sweetest-natured dog I’d ever met. Her shyness, from whatever trauma she had suffered, just overwhelmed her personality, and, like Becky, nobody noticed her.

A few days later, we sneaked in one more visit to Ossining, before going up to Vermont to spend a few days with some dear friends. This time, Becky went looking for Sydney, they spent an hour together, and while she was still in timid dog mode, at the very least Becky began to understand what I’d seen in her, even if there was a bit of seller’s remorse for allowing me the decision–I quite liked Lucky, but he’d made it abundantly clear that he wanted to be Becky’s little boy and was tolerating me as a necessary inconvenience. On the way out, we said “Sydney, please,” told them we were heading out of town for several days and decided that it would be much better if she were to stay there until we returned. After five lovely autumn days in northern Vermont, including a stop at the Calvin Coolidge Birthplace in Plymouth Notch on the way home, where I acquired a t-shirt with the words “I do not choose to run for President in 1928” on the front, we came home late on a Tuesday night, and early the next morning dashed straight off to Ossining to collect our girl and begin our new life. The date: October 15, 2014, two years ago today.

She was six or seven years old, and had clearly been dearly loved in the past, by an older woman I’d thought, as she was more inclined to bond with women, beautifully behaved and mannered, and for the first several months every time a woman of a certain age would make an appearance in the street, Sydney would go bounding up to her, apparently hoping she’d once again found what she’d lost. She never quite found that, but we think other things have turned up in place of her prior life. The sadness resulting from whatever trauma landed her in shelters for nearly a year was apparent on her face and in her demeanor, but with the passage of time has faded. Here she is in her last picture at Love Dogs as we were signing the papers, moments before we brought her to her new home. If you find this face in any way, shape, or form resistible, seek immediately medical attention. 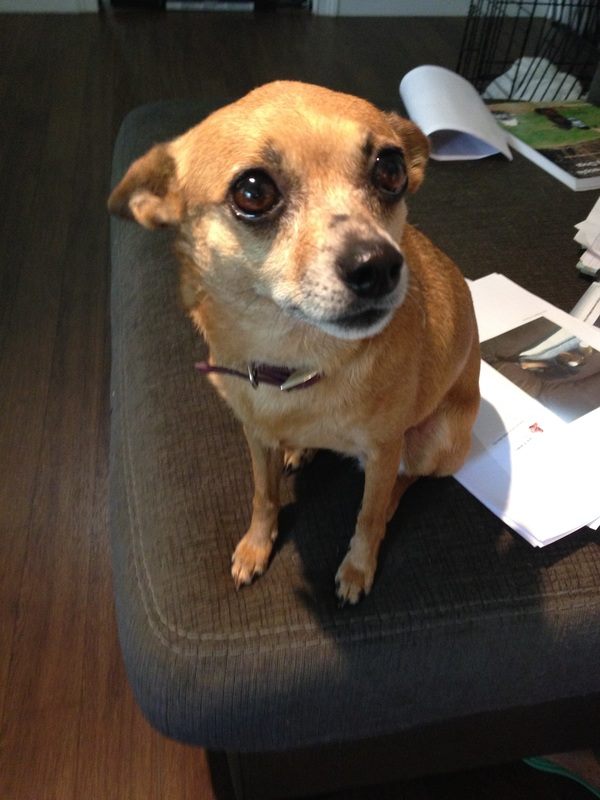 She spent a certain amount of time relatively unsure of her new surroundings, but, assured of food, a comfortable warm place to sleep, and more attention than she’d had in years, began to tough it out. 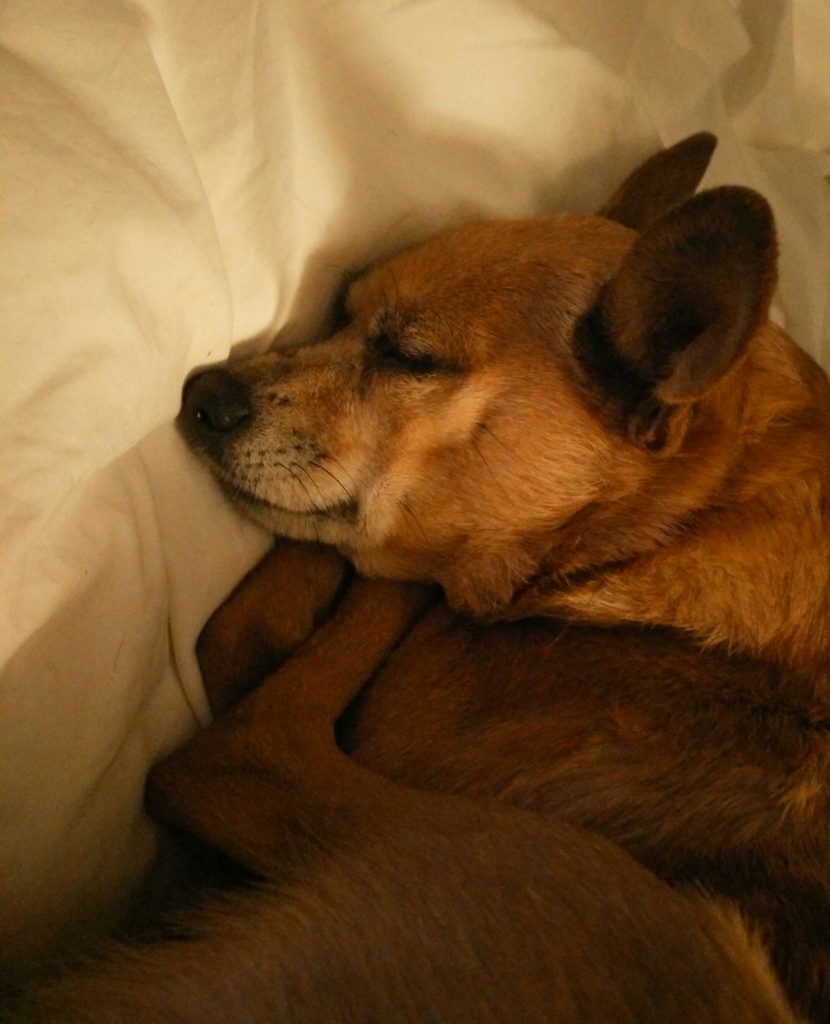 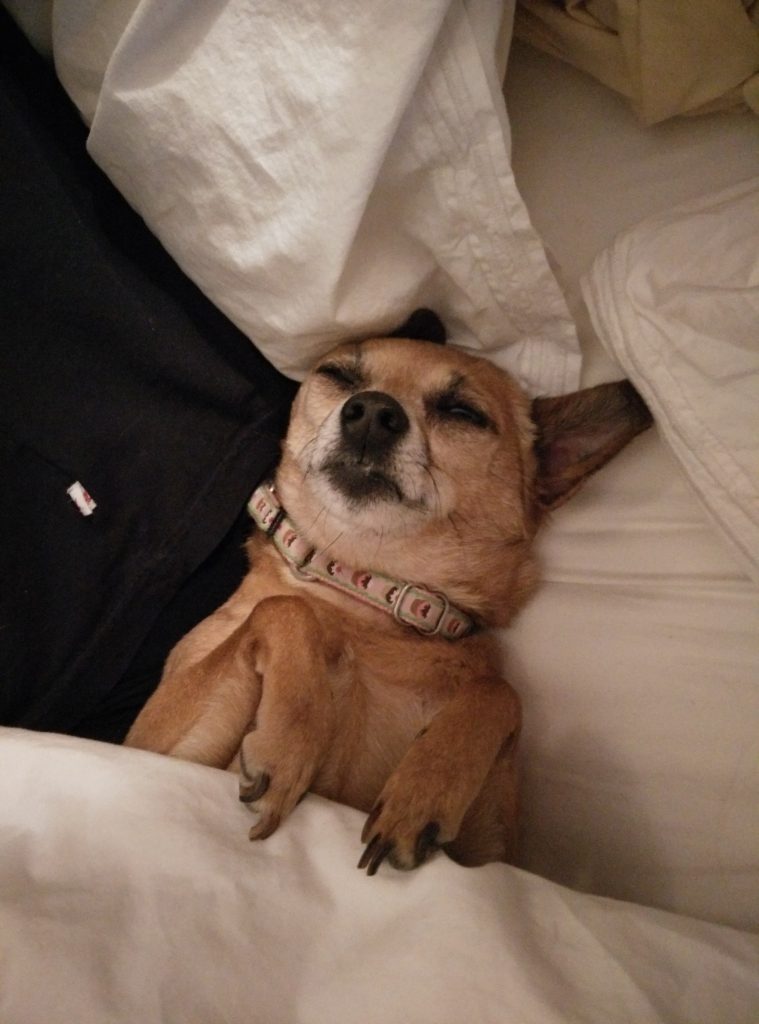 Although, to be sure, waking up in the morning can be something of a trial. 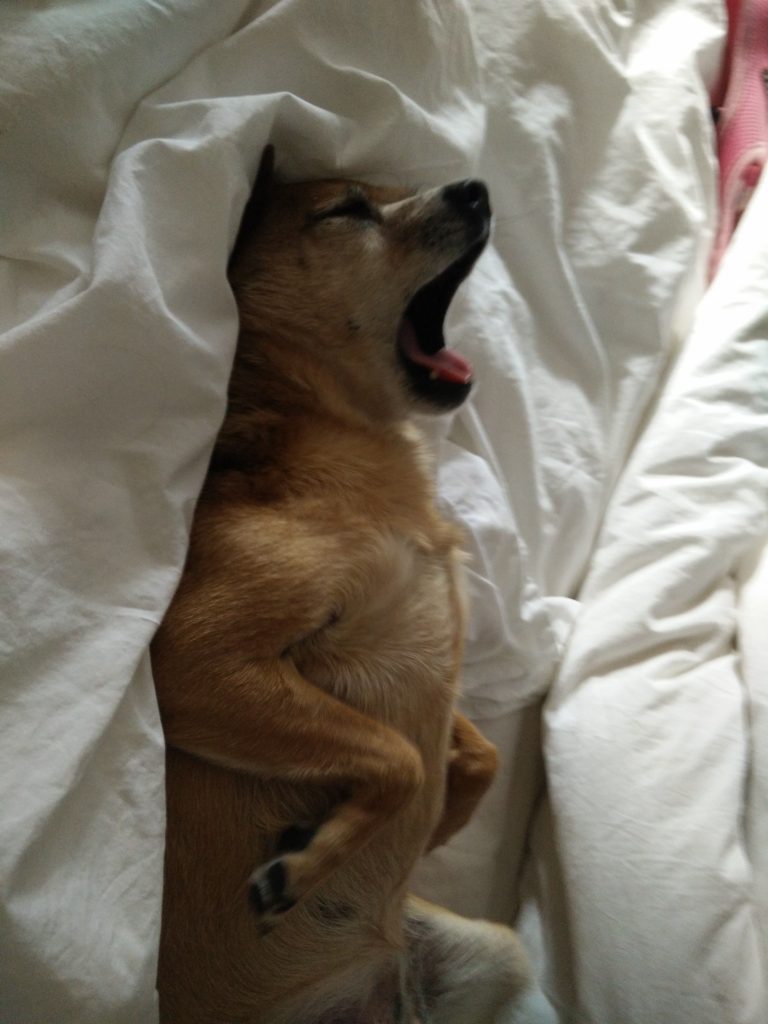 With the passage of time, she’s lost most of her timidity, and is on hand-licking terms with everyone she meets (unless you’re a small white dog, in which case all systems go to DEFCON 2), and even has a strange sort of détente with our onomatopoetically recently-rechristened 14 year old grumpy cat, Bramp, who doesn’t have a clue what to do with the occasional head lick, other than to wait until Sydney tiptoes down the long dark hallway where Her Brampness might be hiding under the James II chair where the hall takes a little zig-zag in order to make an almost-but-not-exactly playful slash. Dignity restored.

If you’re a chipmunk or squirrel, however, you’d better be on the alert, because The Huntress™ is on the prowl, and your station in life is up a tree, right where she chased you. (Notwithstanding the fact that she comes from Brunswick stew country, we remain convinced that she wouldn’t have the slightest clue what to do with a squirrel if by some administrative error she managed actually to catch one; however, that possibility remains suitably remote that undue exertion need not be undertaken in planning for the eventuality).

She’s a whole lot less scrawny now, quite a bit whiter in the face, a lot more expressive, though we still can’t quite translate all the sounds she makes when there is a disturbance in the force (most of them mean “hey, food”) except that they clearly mean something and usually make us laugh at our inability to distinguish the respective meanings of two or three intakes of air and saliva, and can often be found curled up on the nearest pillow, or, after dark, under the comforter at the foot of the bed. That’s our girl, and we wouldn’t have had those two years pass any other way. 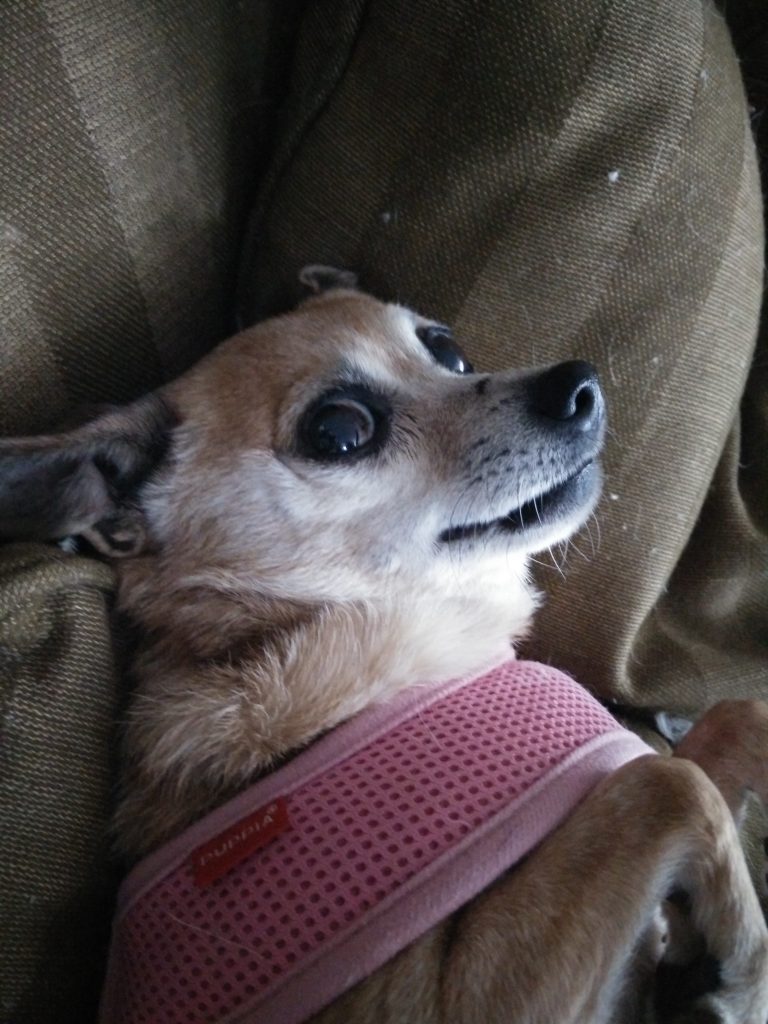